Navigating risk when bidding in a consortium

An uptick in consortia deals and buy and build strategies

We have seen a sharp uptick in consortia deal volumes over the past 10 years. Consortia deals can be a means to pool resources to go after an asset that is otherwise too big to acquire alone. Or they can involve financial investors engaging strategic partners with a view to combining assets to realise synergies, bring different expertise to the group or address capability requirements in remedies processes. Private equity investors are increasingly employing buy and build strategies or engaging in bolt-on acquisitions, via both joint investments and sequential deals.

Pooling resources can have material benefits – but can also create risk. What should financial investors be thinking about in these scenarios, both before the investment and once it is made? 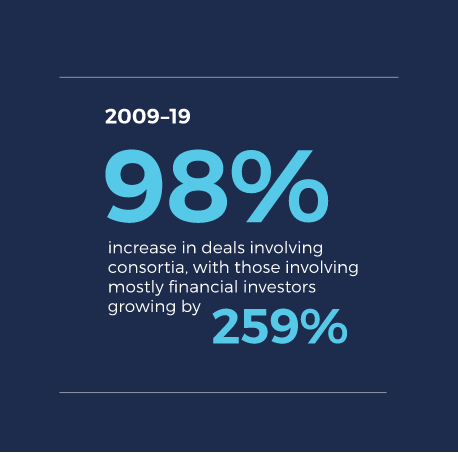 When a financial sponsor wants to execute a joint bid with a strategic partner for an asset in the same space, this can make antitrust come into focus at an early stage in a way that has historically been more familiar for strategic investors than financial sponsors.

The bigger the consortium, the greater the execution risk

Acquiring targets as part of a consortium increases the likelihood of substantive competitive overlaps between the target and other portfolio company interests held by the investors. This is especially the case if the consortium includes strategic players and/or financial investors that have existing portfolio companies that are active in the same sector, even if they only hold minority stakes. It is crucial to identify potential competitive overlaps early in the process in order to be able to properly assess the level of antitrust risk and an appropriate strategy for dealing with it, as well as allocating it among the parties.

Minority stakes and cross-directorships held by consortium members in competitors of the target are increasingly featuring as part of substantive antitrust assessments. This can surprise investors who haven’t identified these overlaps in advance.

More consortium members generally leads to a greater number of merger control and/or foreign investment control filings, with many jurisdictions triggering on the basis of the turnover and/or assets of acquiring entities who will exercise ‘control’, even if the target has no turnover. Even minority stakes not amounting to control (with shareholdings as low as 10 per cent) can give rise to filing requirements in some jurisdictions.

The scope and nature of the operations of consortium members, as well as the arrangements between them, will drive the number and type of filings required and the length of time between signing and closing. In a competitive auction process, analysis of the impact of this should be carried out ahead of consortium formation as it may colour how the consortium’s bid is viewed by the seller.

Merger filings can sometimes be avoided where consortium members adopt a so-called ‘shifting alliances’ structure, but this means none of the consortium members can have the ability to block important strategic decisions on a stand-alone basis. This kind of structure can attract close scrutiny to make sure it is not seen as an avoidance mechanism, especially in China.

Financial investors also need to tread very carefully around so-called ‘warehousing structures’ where the economic risk and upside of an asset are allocated to an ultimate purchaser that is not the notifying party. Authorities are taking tougher enforcement action against such two-step structures, particularly if they are seen as having been designed to avoid merger control at step one.

Straightforward financial investments where antitrust is simply a process point to be addressed later are increasingly a thing of the past. Financial investors should be thinking early and carefully about antitrust and the part it can play in their deal planning.

Businesses being sold as part of a remedy can make for attractive investments, with the prospect of taking advantage of the constrained timetable faced by the sellers. But antitrust authorities need to approve the identity of a purchaser of a remedy divestment business and they apply strict requirements regarding expertise and capability in order to make sure that the accepted remedy purchaser will be capable of replacing any lost competitive constraint as a result of the merger.

To satisfy these requirements, financial investors may need to team up with established industry players. A balance needs to be struck here to create the necessary credibility without raising new substantive antitrust issues, which can be a barrier to approval.

Being a remedy taker can put investors in a strong negotiating position but the approval process requires careful navigation and upfront planning.

An alternative model: buy and build

An alternative way of benefiting from strategic partnering without facing the complexities and risk execution of a joint bid is to structure investments sequentially. This allows the initial investment to be made essentially free of substantive antitrust risk. But it is important to have a clear antitrust strategy and execution plan from the outset:

We are seeing a lot more private equity clients looking at industry consolidation. When deal economics depend on being able to consolidate later, investing up front in careful antitrust analysis and strategy design can really pay dividends.

Avoiding collusion in an M&A process

Financial investors should be aware of the risk of collusion when teaming up with consortium members. There are often entirely legitimate reasons for acting as part of a consortium or with a strategic partner – for example where the size of the target is such that it cannot be acquired on a stand-alone basis, or there is a legitimate need to involve an established industry player in order to be able to effectively manage and grow the target post-transaction. As long as there is an objective justification and creation of the consortium does not lead to an elimination of competition for the relevant asset, this risk can usually be managed.

Prepare for new rules on information exchange: in revising its horizontal co-operation guidelines this year, the European Commission is expected to provide guidance on the circumstances in which cross shareholdings can create an inappropriate conduit for information exchange. This will be a good time for investors holding non-controlling interests in more than one competing portfolio company to refresh their processes.

Review antitrust compliance and risk on any cross-directorships: enforcement and/or the introduction of new legislation to address potential dampening of competition arising from so-called ‘common shareholdings‘ across the same industry has been threatened in the past on both sides of the Atlantic. US agencies are this year expected to focus on cross-directorships, bringing enforcement actions where representatives of the same private equity company sit on the boards of competing companies. Investors should ensure that where they have investments across the same industry they have appropriate confidentiality procedures in place.