The impact of geopolitical tensions on mergers and antitrust risk

The last few years have seen a marked rise in geopolitical tensions across the globe and a resulting increase in protectionist and interventionist approaches to M&A activity.

2021 is likely to see a continuation of the recent trend of more jurisdictions introducing far-reaching foreign investment and public interest review regimes. We are likely to see increasing tension between increased regulatory cooperation among allied jurisdictions on merger control on the one hand and, on the other, foreign investment reviews and the potential for protectionist agendas to lead to reduced regulatory cooperation between jurisdictions seeking to protect domestic champions. The result is increased levels of deal uncertainty, a more complex appraisal and allocation of risk, enhanced scrutiny of ownership structures and longer completion timelines.

Like in merger control, global transactions require global strategies for foreign investment filings in order to be successful and to mitigate the concerns of governments, which themselves are seeking more and more to coordinate their enforcement.

Foreign investment controls have been multiplying globally for a number of years and 2021 is likely to be no different. A number of legislative proposals promising to impact the foreign investment landscape are underway, particularly in Europe. Fifteen jurisdictions in the EU now have a foreign investment regime, eight of which are new or recently amended, and others are planned, including in Ireland, Denmark and Sweden.

The new EU framework on the screening of foreign direct investments came into force in October 2020. Unlike the EUMR, the new EU Screening Regulation does not impose a ‘one-stop shop’ filing obligation on parties. However, it puts in place a cooperation mechanism between EU member states and the EC, creating additional scope for concerns at the member state level to spill over to other member states and adversely impact deal completion.

The UK government’s National Security and Investment Bill (NSIB) is making its way through Parliament, carrying with it the prospect of mandatory filing and pre-approval requirements across 17 critical sectors; a UK government "call-in" power for any other deal; and heavy sanctions for non-compliance across a range of sectors and encompassing all kinds of transaction (including minority acquisitions). The NSIB is expected to come into force later in 2021 and will operate alongside the Enterprise Act 2002’s existing "public interest" regime governing media plurality, public health and financial stability.

Even in China, where foreign investment restrictions have been loosened in recent years and where its national security review rules have been used sparingly, the trade war that has hitherto dominated United States-China relations continues to threaten the status quo. It has already led to retaliatory trade measures that could spill over into merger control review (which already includes Chinese industrial policy and public interest considerations) or even into foreign investment and national security reviews. The Biden administration is unlikely to change the current political and trade dynamic between the two countries significantly, hinting at further potential intervention against foreign investment in China. In fact, a return to stronger ties between Europe and the new Biden administration may negatively impact foreign direct investments from China into Europe.

Many of the changes being adopted have major substantive and procedural implications and are being implemented with little advance notice and, in some cases, even with retroactive effect, making this a particularly tricky regulatory environment to navigate. 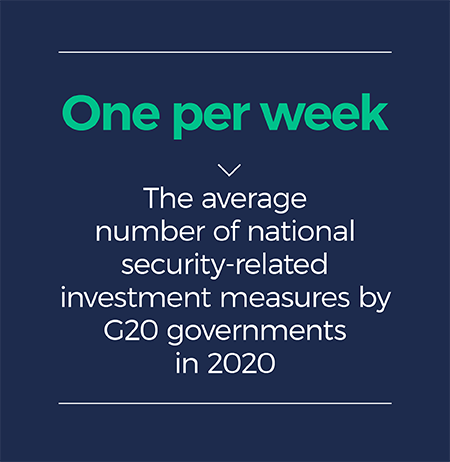 Elsewhere, existing regimes have proposed material changes to jurisdictional rules, lowering the thresholds for review and making it far easier, and therefore more common in the future, to trigger reviews. This includes the Golden Powers regime in Italy; the Foreign Investment Review Board review in Australia (where monetary thresholds had been temporarily removed entirely and still remain at $0 for certain transactions); and the Japanese regime where the relevant shareholding threshold for notification of investments into Japanese listed companies in certain key industries has been lowered to just 1 percent.

For investors from Asia, in particular China, foreign investment risk is no longer just about CFIUS in the United States. Instead, an early risk assessment across multiple jurisdictions is now critical to successful deal planning and execution.

A new concept of national security?

The scope of foreign investment and public interest regimes continues to expand, in line with an ever-broadening concept of what constitutes national security – the outcome of the attempted Broadcom/Qualcomm tie-up, to cite just one example, was at least in part driven by a desire to protect against China’s dominance in 5G, which the United States government believes would be detrimental to US national security. The UK NSIB may encompass a similarly broad concept of national security which no doubt underpins the UK government’s current estimates of up to around 1,800 deals being notified each year.

National security legislation tends not to draw clear lines around what constitutes a threat to national security. While that provides necessary flexibility to governmental decision-makers, the secretive nature of these processes and evolving notions of national security make for a difficult-to-decipher and ever-changing regulatory environment for dealmakers.

Government reaction to the COVID-19 pandemic has also indicated a greater willingness to extend existing regimes to cover sectors that until now would not have traditionally featured in public interest and national security reviews in many countries. Governments have quickly realized that the protection of domestic capabilities across healthcare sectors is important for national security and have reacted accordingly. For example, the temporary widening of regimes to encompass all aspects of public health and health technology sectors has been made permanent in France, Germany and Spain. The ease with which these regimes were expanded could well set a precedent for further expansion of foreign investment and national security regimes across the world in the coming year.

Nowadays governments are no longer reluctant openly to entertain the prospect of inserting politics into antitrust reviews. A striking new tool, with potentially far-reaching consequences, is the EC’s White Paper on levelling the playing field as regards foreign subsidies, which proposes an expansive new legal instrument targeting any kind of foreign-subsidized commercial activity affecting the EU in order to plug a perceived gap in EU antitrust enforcement. The regime would combine ex ante and ex post tools and grant significant investigatory and sanction powers. It will add multiple layers of uncertainty and complexity to deals that touch on EU markets. An assessment and awareness of such issues at an early stage of deal planning is crucial to navigating the complexity.  The issue of subsidies was indeed one of the biggest stumbling blocks to the UK achieving a post-Brexit deal with the EU.

Tackling the effects of foreign subsidies in the EU single market is a top priority of the Commission. A new foreign subsidy regime will add to the regulatory requirements for dealmakers as a foreign subsidy assessment will have to be factored into deal timetables alongside the existing merger control and foreign investment review rules.

The UK shuts 'the back door' to hostile foreign investment: the new UK national security regime