Denise Bauer Weiler recalls her time at Freshfields and how she made her move to management.

After joining the firm in 2011 as a fresh-faced trainee, Denise became a principal associate in Frankfurt’s finance group. After secondments with Credit Suisse and Deutsche Bank, she was inspired to change tack and pursue a more management-oriented career.

Now head of regulatory affairs for Europe, the Middle East and Africa (EMEA) at UBS Europe and a lecturer at Frankfurt School of Finance and Management, Denise is busier than she’s ever been.

What do you remember about your time with Freshfields?

I decided to stay on at the firm after joining as a trainee because it was such a large and exciting organisation to be part of.

Everything Freshfields does is about providing high quality professional services for its clients. When I think back to my time there – at the start of my career – I would say that Freshfields’ most important asset was (and still is!) its people. It’s one large network of people working cohesively towards a shared goal. There’s a real sense of team spirit.

Did you have a mentor at Freshfields?

Yes, Wessel Heukamp, an M&A partner in Munich. He was an associate when I first met him during my law studies. We stayed in contact up to the time I finally decided to join Freshfields.

I think, for a trainee, having a mentor is really beneficial. Now I am in a more senior role I want to pass that on, so I’m acting as a mentor to people working with me.

Are you still in touch with anyone?

It’s difficult not to be as Freshfields' Frankfurt office is in the building next door!

I would say I talk to my former team members in the regulatory teams bi-weekly. So many topics that cross my desk will have crossed theirs too.

How did you become a lecturer?

A professor asked me if I was interested in holding some of the lectures. My job keeps me busy but I have found the time to do the financial regulatory law session twice during the semester.

It's actually helped recruitment. We had some open positions at UBS and I asked a couple of students if they’d like to apply. They now sit with me in the office, which is nice, and I’m now acting as their mentor as they develop in their careers.

What prompted your move to financial services?

After my first secondment to Credit Suisse I decided – for the following secondment at Deutsche Bank – to go into the corporate governance department, not the legal department, and to take a management position instead.

This was among the first steps I took away from being a lawyer and towards a more managerial position. I left the firm after five years, in 2016.

How does it differ from Freshfields?

I have very different responsibilities and there’s much more emphasis on management rather than the client-facing work of an international law firm.

It’s this management area I have had to develop, so I’ve been attending leadership conferences and seminars with UBS and I’m pleased to say it is now a natural part of my job.

How has your time at Freshfields helped you?

Regulatory law, which I specialise in, is very knowledge based, and everything I know about it stems from my time at Freshfields.

Even though a lot of the work I did revolved around German law, the experience was invaluable.

What's the approach of UBS to fintech?

I have a number of focus topics and, yes, one of those is digitalisation. My line manager, who’s the COO of UBS Europe, has a natural interest and a technical understanding of it, which is useful for me. We use digitalisation at UBS to challenge our current systems and activities in the financial sector and to think about how we can work with new products and services.

UBS has a lab in London as part of its technology initiative, which I’m looking forward to visiting. The people who work there are dedicated to researching new banking activities and products, so it’s all very interesting.

What advice would you give to your trainee-self if you were just starting out?

I think, at the very beginning, I’d say to be open-minded. Don’t think that you have to know everything immediately, but do your best. Be interested in the industry.

For example, if you’re working within the financial regulatory department, it's important that you're interested in the financial sector in general. This makes it easier to understand the client and their needs, which are always business-driven, not law-driven. So, I’d say: 'Remember to not only be interested in the law, but in what that means for the client’s business'. 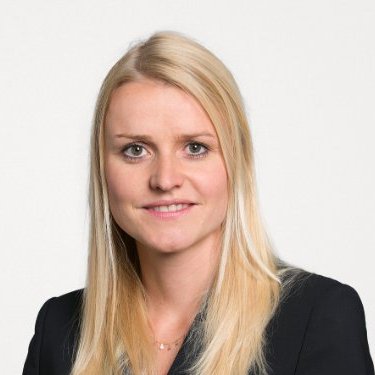